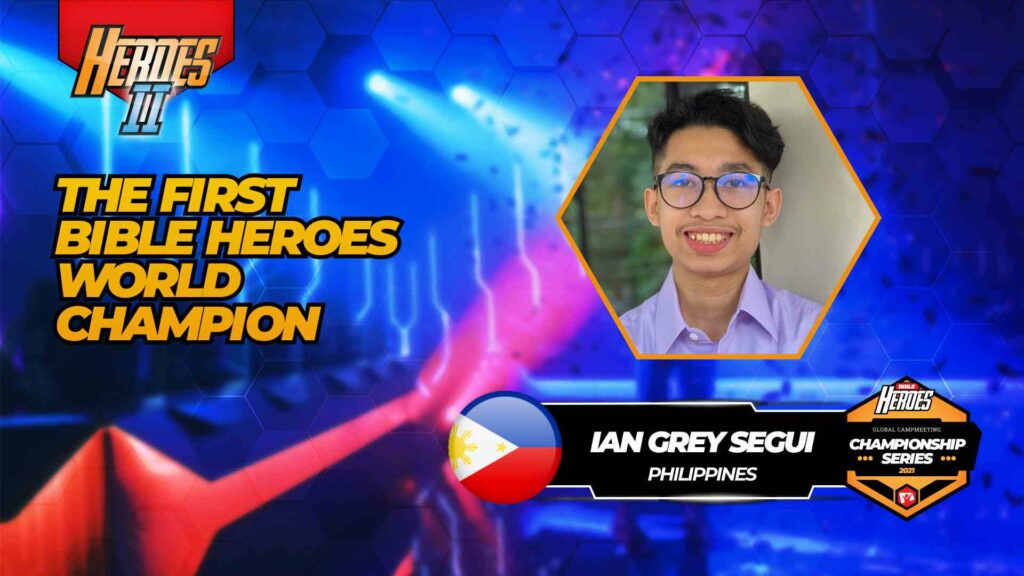 Who is the first-ever Bible Heroes world champion?

In this article, let’s get to know the following about him:

But first, let’s take a glimpse of Heroes World Championship.

What is “Heroes World Championship”?

The General Conference of the Seventh-day Adventists conducted the Global Campmeeting last May 19-23, 2021.

Heroes World Championship was one of the programs in the exhibit. Its qualifying rounds took place from the 19th to the 22nd and the final round on the 23rd.

Can you imagine the pressure?

After which, the qualifiers from daily game sessions moved on to the final round. Pastor Sam Neves, the man behind the game, hosted the Finals himself.

What a grand event!

Do you want to watch it? Here is the video: Bible Heroes World Championship Final [WATCH IT LIVE].

Now, you may be wondering about Ian’s experience in the competition. But hold on. We’ll talk about it later.

Let’s get to know him first.

Who is This First-ever Bible Heroes World Champion?

He is Ian Grey Antoni Segui, a 14-year-old boy from the Philippines.

Ian hails from Lopez, Quezon. His parents are Greyson and Shyrell Segui, and his younger sibling is Ivy Shy.

Now, what about his education?

Ian is currently in grade 9 at Lipa Adventist Academy in Batangas.

No gadgets at home!

Can you believe it? Well, it’s true.

But through this upbringing, he was able to focus on his studies and spiritual life.

And that’s the good side of it.

His family influenced him to study the Bible.

“Ever since I was a kid, they taught me so much about the Bible,” Ian shared.

For instance, his father would show him Amazing Facts and other Adventist channels. With this, Ian would ask questions on things that caught his curiosity.

Have you watched any of those?

Anyway, his father, mother, and grandfather would also render sermons in church services. Because of all this, Ian developed an interest in learning the Bible.

True enough, he spent most of his time reading this sacred book. I mean, why not? He had no personal gadgets to distract him, remember?

But his parents also encouraged him to read other Adventist resources. One of them was the Spirit of Prophecy.

This was the habit his parents wanted him to cultivate instead of playing computer games.

How about you? Do you study the Bible, too? How does it influence your spiritual growth?

He was active in local Bible tournaments.

For instance, he took a Bible quiz and a conference-wide Bible spelling bee in elementary.

Guess what. Ian won both!

With all this, do you think he had the courage to sign in for the global Bible trivia tournament right from the start? Let’s see.

Adventist education had a significant impact on his growth.

“Adventist education helped…in reinforcing Christian behavior and ethics to our children. It is important that whatever we teach at home is in sync with what the teachers [say] in school,” Ian’s mother said.

True enough, this education has served Ian well from elementary to high school. Hence, it must have shaped his childhood life.

Also, it helped him grow closer to God. As such, it could have been one of his motivating factors for finally deciding to get baptized at 12.

Now, How Did He Discover Heroes Bible Trivia Game?

As you have learned earlier, Ian didn’t grow up playing games that much.

But something caught his interest.

That is, he heard that Hope Channel developed its own Bible trivia game. It surprised him to know that the Adventist denomination could produce a gaming app.

Not only Ian but also his father was thankful for this brilliant initiative. Thus, he would like to commend the creators.

At the same time, his father saw the game’s evangelistic potential.

He noted, “This reveals to us that there are people we still need to reach through this medium.” Indeed, it is a way we can “cater to their needs and introduce Jesus.”

“What I like most about the app is the different features…from the effects to the challenges,” Ian shares.

For instance, the power-ups are a great help in answering difficult questions. Plus, they help advance the game.

Second, it fascinates him to see modern graphics and animation. And true enough, this technology is better than that of other rated Bible trivia games in the market.

As such, Ian can’t help but appreciate the designers of the game.

Third, he loves the self-paced Bible Study Module. Why? Because it answers life’s biggest questions such as:

With all these, the work of all people behind the game “paid off,” Ian concludes.

How Was His Experience During and After the Competition?

Ian joined the championship to play and interact with other players from all over the world. And did you know that his father Greyson joined, too?

With this, winning was not their intention. Instead, Ian and his father wanted to enjoy themselves. At the same time, they liked challenging their gaming skills and knowledge of the Bible.

But do you know what? By God’s grace, they made it to the Finals last May 23. The spot began with the Union Level competition.

At this level, they played against 14 other world qualifiers from these countries:

But after this, only Ian made it one on one with the Canadian finalist David Jeffrey in a best-of-three series.

Could you imagine the nerve-racking tension Ian felt?

Yet, he won both the first and third rounds in this series! Hence, he emerged as the champion of the entire competition.

Well, he never expected it. In fact, he was “nervous the whole game.” But after that, he felt relieved knowing that he did something good for God and himself.

And yes, several people from all over the world congratulated him. He was so overwhelmed.

What Can You Learn From Him?

For Ian, “Heroes is not [only] a game but a tool designed to reach millions of young people.” It is an app “designed to make its contents, interface, and [goal] close to the Bible.”

With this, he advises you to spend “more time in praying and reading the Bible.” Why? Because it would “help us to grow more in our spiritual life” and “our relationship with…Jesus Christ.”

So, instead of playing other games, Ian invites you to play Heroes. “It doesn’t only give us entertainment” but also “increases our Bible knowledge.”

But he has a warning.

That is, there is no better substitute for knowing God than studying the Scriptures. So what does he mean?

Ian emphasizes that the game is only “a tool.” Hence, “it should never replace our relationship with God and other people.”

Finally, he encourages you to “use this media to introduce Jesus Christ to others.”

We Want to Hear From You

Did you enjoy reading Ian’s story? What lessons have you learned?

With this, would you want to be like him someday? Who knows, you’ll be the next world champion!

7 Things to Learn From the Strongest Man in the Bible

Who Were Behind the Game Engineering of Heroes and How Did They Do It?