You’ve probably heard of Hope Channel. But did you know it is a partner of Heroes: The Bible Trivia Game? What role does it play?

In this blog, we will talk about:

No more time to waste. Let’s dive right in!

What is it? What does it do?

It operates with 67 channels globally. These channels broadcast their programs based on the language and culture of their audiences.

Where in the world is it located?

Hope Channel is in the office of the General Conference of Seventh-day Adventists. It is in Silver Spring, Maryland, United States of America.

It is part of the Religious Organizations Industry.

This industry comprises organizations providing and promoting religious worship and activities. But it excludes schools and hospitals operated by religious organizations.

Meet two of its directors!

As of 2022, Derek Morris is the president of Hope Channel International. He oversees the operations of the network.

What led him into this position is his established relationship with Hope Channel. For instance, he has hosted its Hope Sabbath School for over six years.

He has served as the associate secretary of the Ministerial Association. He has also pastored various churches, such as Forest Lake Church.

Before assuming this position, he has served with distinction as the general director of Hope Media Group Ukraine. He has led this team since the start of its operations in 2008. Through his leadership, Hope Channel Ukraine became the most famous Christian channel in the country.

What is the network’s mission?

That is, to make disciples of all people, communicating the everlasting gospel in the context of the Three Angels’ messages.

Through this, they accept Jesus as their personal Savior and unite with His remnant church. They are to be discipled to serve Him as Lord and prepared for His soon return.

What biblical principles drive its mission?

But, particularly, these are the core biblical beliefs that inspire the network’s programs:

What are some continents it covers and languages it caters to?

With these, here are a few of the countries covered:

Now, these are some of its supported languages aside from English:

What are some of its programs?

This program answers biblical questions from its viewers via live call or text message.

Giving insights for each episode is a panel of theologians, pastors, and other Bible experts.

The hosts are Kenia Reyes, Ruben Covarrubias, and Tiffany Brown.

This event offers Hope Channel donors spiritual fellowship and retreats in exchange for their financial support.

It provides inspiring messages from gifted resource speakers such as Derek Morris and Dwight Nelson. Enhancing the program are special musical performances by various artists.

There are also insider updates on how the donors’ support has impacted lives around the globe.

This show is an in-depth study on the life of Christ hosted by Oleg Kostyuk.

Why “Cross Connection”? Because the show links Christ’s ancient sacrifice on the cross and our need for His forgiveness.

It runs through an interactive conversation with in-studio guests, via phone calls with viewers, and through social media chats.

Each episode examines Jesus’ life based on the testimonies of the Gospels of Matthew, Mark, Luke, and John.

This segment answers questions about and provides tips on health and wellness.

The host, Dr. Nerida McKibben, is a medical doctor with experience in lifestyle medicine.

She offers you an analysis of your health concerns and provides steps for the necessary change or improvement.

This program offers you a weekly worship experience you can enjoy at the comfort of your home.

It is hosted by Sam Neves, Associate Director of Communications of the General Conference of Seventh-day Adventists.

The show includes the following:

These program components all focus on the hope that Christ brings to this life and beyond.

This forum is an in-depth, interactive study of the Bible hosted by Derek Morris.

In this program, a group of young adults participates in a lively discussion of the Bible lesson every week.

This is a global community of prayer.

Hosted by prayer volunteers, the show invites viewers to call in with their prayer requests and thanksgiving. Then, the hosts pray for them.

It features real-life stories of faith and testimonies of revival and reformation around the globe. It also includes a study on the life of Bible characters.

Hope Channel in Partnership With Heroes

What has been the role of Hope Channel?

Hope Channel has been the publisher of Heroes: The Bible Trivia Game in coordination with the Seventh-day Adventist Church.

The network launched the game last March 25th, 2021, with the name Heroes 2: The Bible Trivia Game.

What inspired this partnership?

Heroes 2 was a prequel to its first edition, Heroes the Game, spearheaded by Sam Neves.

This original version set the trend for other Adventist Bible gaming apps because of its massive success. For instance, it had 10 million minutes of interaction in 2013.

What was the result?

This development relaunched the game with 3D animation, multiplayer mode, and more challenging trivia questions. It also added a more detailed background of the biblical characters.

What programs has Hope Channel been sponsoring or will be providing Heroes with?

The management of Heroes wanted to reach more people through the game.

And so, “we need to work through these affiliates…to get this game in multiple languages,” Sam Neves noted.

It is because “people don’t want to read in someone else’s language.” They “learn the stories in their own languages” and hope to use the same medium in playing the game.

Demyan answered, “The idea is to involve all our networks in developing this game in many languages.” By working together, he assured that the work of translation would be much faster.

And so, translators from various countries were hired.

Because of this, Heroes is currently available in French, Hindi, Portuguese, Romanian, Spanish, and Swahili, all based in English. More languages are coming soon!

What if you can’t answer the difficult game questions because you don’t have much knowledge of the Bible?

Well, Demyan said, “If you can’t reach the next level, go to the Bible study.”

For this, Hope Channel helped Heroes put up The Big Questions.

It is a 20-module Bible study course that answers twenty frequently asked questions about the Bible. Guiding you in the modules are the same “heroes” you play in the game.

These are some of the questions included in the course:

But why are these questions not about the Bible characters themselves? How can they help you answer the trivia questions in the game?

Well, the heroes are in the course for a reason. As your study guides? Yes, but not only that.

They also share bits of their life stories in relation to the study questions they’re answering for you. From those facts, you get clues for the game questions you find difficult.

When you finish any of these courses, you get more manna. Really? Yes!

Your “experience points” or XPs increase as you collect more of this. And yes, you get to unlock more heroes, leveling up your game.

The prayer portal for Heroes is much like the same, except that this one is not on television.

So, you don’t have to worry about having your prayer requests and thanksgiving broadcast publicly.

Instead, you only have to send them privately via Facebook Messenger. We have a team ready to listen and pray for you anytime.

Hope Channel is planning to launch a game show based on Heroes in the USA this year.

What will it be like? You will know soon. So, keep an eye out for more details.

What is the ultimate goal of this partnership?

“We can be very efficient and strong,” Demyan said. “We can do really significant projects if we are united—if we put efforts together.”

But we should remember that “it’s not about us.” It’s neither about the “brands” we promote in this digital ministry. Instead, “it’s about Jesus—about His love.”

Demyan ended with an invitation for all of us to unite in promoting and developing the game. By doing so, we support the digital evangelistic ministries around the globe.

All these efforts contribute to God’s mission for us—to preach His gospel to all the world.

”Go therefore and make disciples of all nations, baptizing them in the name of the Father and of the Son and of the Holy Spirit, teaching them to observe all that I have commanded you. And behold, I am with you always, to the end of the age” (Matthew 28:16-20, ESV).

Let Us Hear From You!

Did you enjoy this article?

What have you learned about Hope Channel? What did you think of its collaboration with Heroes?

Let us hear your thoughts in the Comment section below. 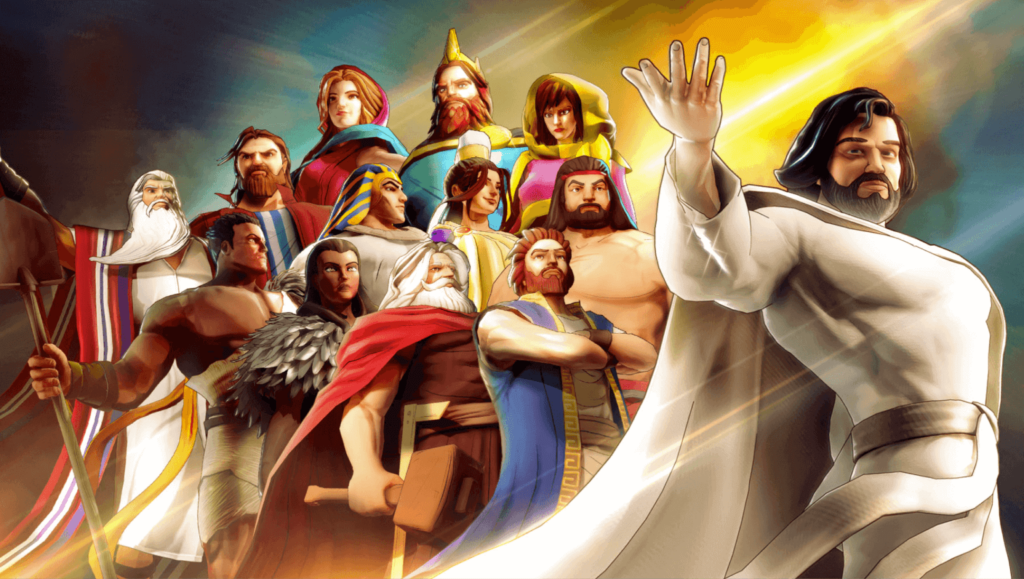 Heroes Bible Trivia Game Featured in the Museum of the Bible!

Understanding the Bible: How Important is It?